{Peaking} into the Down Slide

Happy Monday morning friends.  I’m incredibly relieved and relaxed this Monday because it’s a rest day and after training in Lake Placid all weekend long, I physically and mentally am ready for a rest day.  So, since I’m resting, rather than training, I figured I would do a quick recap.

Friday afternoon I set out to Lake Placid along with several other friends to start our peak weekend of training.  Friday’s schedule called for a 2.4 mile swim in Mirror Lake.  I have to be honest, I was not looking forward to this.  Swimming is just … well, boring.  It’s not that I can’t do it.  It’s just that there’s nothing to do but swim.  And again, being honest, this would only be the second time that I had ever swum 2.4 miles.  The first having been at Lake Tahoe in September of last year.  So to make a bit of a long story short, I was just not feeling the Friday evening long swim, but thanks to good friends I sucked it up, put on my wetsuit and entered the water. 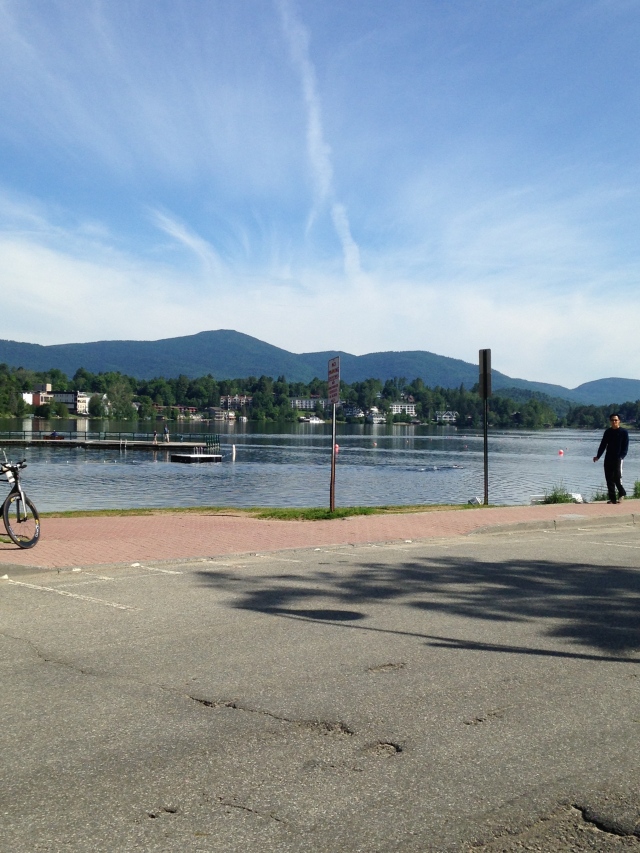 Not too shabby of a place to swim!

I truthfully don’t know the exact water temperature, but I can tell you that with a sleeveless wetsuit, the water felt just fine.  Somehow, I went in to the water, swam 2.4 miles, came out and realized that not only had I done it, but I had done it faster than I had thought I would.  Now, I am never going to light the world on fire with my swim, but I am very happy with how Friday’s swim went.  So a big thank you to my friends who drug me into the water and listened to me complain, even when I got a charlie horse at the turn and kept on swimming.  It was a great boost to my training weekend. 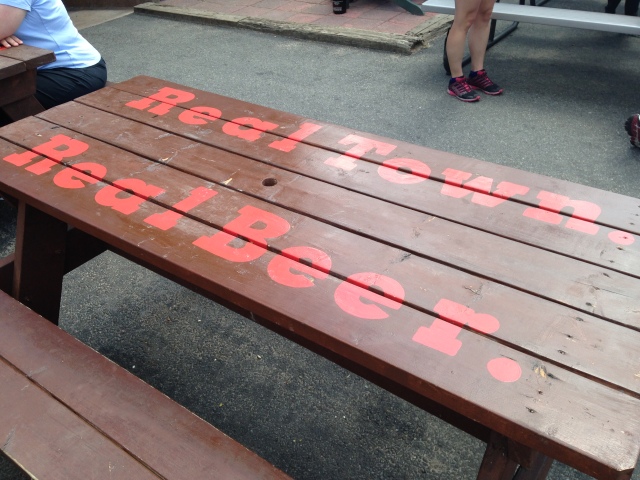 After swimming, we did make a little pit stop at the Lake Placid Pub & Brewery.  This place is the best.  If you’re ever in Lake Placid, they have great food and great beer.  I’ve been a regular customer since my college days at Paul Smiths.  We sat outside, ate a little popcorn, did a little recovery and made a plan for the remainder of the weekend before everyone headed their separate ways for dinner & some sleep! 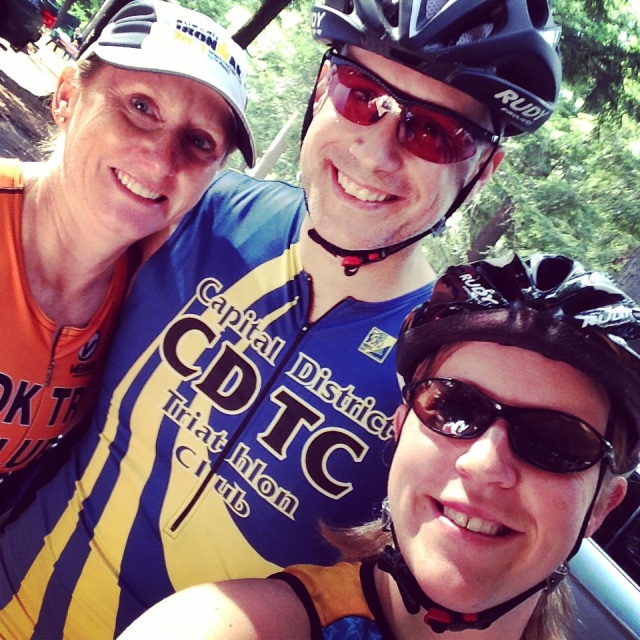 The campsite crew – ready to ride!

Saturday morning came early as usual.  For many riders we had a two loop bike on our schedule which is 112 miles.  We made a plan to meet up in Lake Placid at the Mirror Lake to head out.  My plan was to do my best to hang with Slingshot Scheuing for the ride so we decided to start our two loops directly from our campsite at Wilmington Notch.  That way we would start a little earlier than others, and there was no need to drive, plus we could use our campsite as special needs and fill our water bottles and food reserves.  The campsite is about 9 ish miles from town and it’s right on the bike course.  That 9 miles is a climb, but it gave us a chance to warm up, chit-chat and get our bearings for the day.

Once we got in to Lake Placid, we had several other riders to meet.  It took awhile for everyone to get their gear organized, make any last-minute adjustments, oh and there was also a flat that need to be tended to.  But once ready we paused for a picture before going to work for a long day on the road and in the saddle. 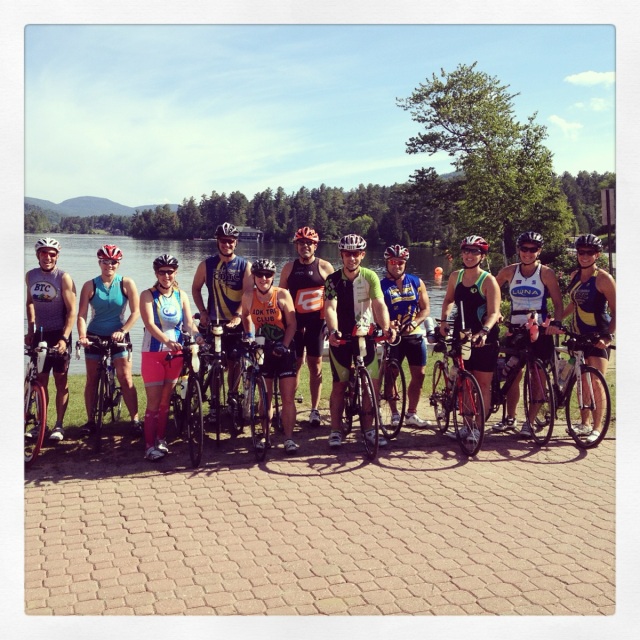 So many great friends!

We were finally ready to head out.  And let me tell you, they finally paved route 73 from the bottom of the ski jumps up to Cascade Lakes.  Holy cow that was some beautiful pavement.  As a bike rider who’s been riding that course for 4 years now, I can tell you that it makes a huge difference.  Not only is it nice to ride on flat new pavement, but it’s wonderful to be able to stay OUT of the road.  Before the shoulder was so bad in sections that you had no choice but to be out in the car lane and it was dangerous! I am very happy to report that with the new paving we are much safer on the course.  Of course the paving isn’t done and there is still plenty of rough road, but overall it’s much, much better than it’s been in the past.  So a big THANK YOU to whomever finally made that possible.  All of the cyclists & their families thank you too.

The first loop of the bike course (56 miles) was relatively uneventful.  We did stop at one gas station to buy some cold water.  Upon entering the store, I saw other friends with a coke in their hand.  Now I’ve heard rumors of how wonderful a cold coke can be mid bike ride, especially when it’s hot, but I had never tried it.  Let me tell you, it was wonderful! I had no idea how refreshing that could be.  I don’t know if it was because it was so hot or what, but it really hit the spot.  Perfect.  After the first loop, Laurie & I stopped at the campsite to refuel while everyone else continued on.  We made a plan to regroup again in town as they would need to stop there and refuel so our timing should be about right.

Our second venture up the bears and into town proved to be just as uneventful as the first. This might be where the singing really started though.  It was hot and riding 112 miles takes a long time so Laurie & I decided that we were going to need to do something to keep ourselves entertained for another 56 miles.  So, singing it was.  And this continued… for the entire. second. loop.

I can say that the second loop didn’t go as well for me mentally as the first had.  I’m unsure as to whether it was the heat or all of the climbing.  I am sure that these things will both be a factor on race day, so I managed to shut my brain off and just keep riding.  Unfortunately, it didn’t come easily, but it got done.  After a second gas station stop and sharing part of another coke with everyone, I rallied and we finished it.  It proved exhausting, but I did it.  Needless to say, we did not go to town for dinner, but rather showered put on pajamas, ate and sat by the fire.  I somehow managed to make it until about 9:15 before going to bed.  Not too bad considering I had spent 7 hours of the day on my bike. 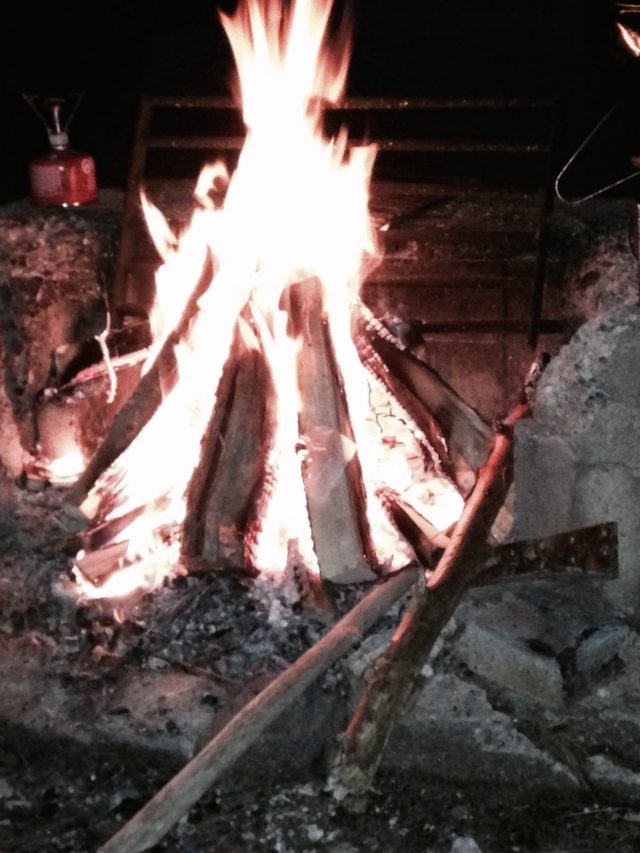 Oh and we made s’mores!

Sunday morning came way too early and with heavy legs.  Between packing up camp and the heat I did not get my entire long run in, but I did some of it and I know that mentally I could have toughed it out for more, I just chose not to.  I was wickedly stressed about packing up the camper and bringing it back down the north way sans Ben.  So this over took most of my thinking.  However, Laurie pitched in and we were able to get the Jenga pieces of the camper all back together properly.  We stopped to fuel up at the Noonmark Diner and headed home.

So, overall a really great training weekend in the bank for Ironman.  We are now on the down slide into taper.  Although I’m not entirely sure that my coach knows that as there are fourteen more hours of training this week on my schedule.  With four weeks left to go, I’m still at work.  I’ll keep you posted!

How was your weekend?

2 Responses to {Peaking} into the Down Slide