First Happy Memorial Day, one day late.  I hope you all took at least a few moments yesterday to remember those who have fallen while defending our freedom.  I am so very thankful for their sacrifice and honored to live in this great country of ours.  And on that note, how did you spend your holiday weekend?  I had the opportunity to head north with my friends to one of my very favorite towns, Lake Placid, and get some Ironman training on.  So, welcome to the recap!

Ben & I packed up the camper and all of our triathlete belongings and headed up to Lake Placid after work on Friday.  Unfortunately, it was raining so that was kind of a bummer.  We were in and out of showers the whole ride and I kept wondering if we would be setting up camp in a downpour or how that would go down.  We had made reservations at the Wilmington Notch State Campground as we have done in the past for two separate sites.  One for our camper and a tent for ‘lil Miss Laurie and the other for a tent for friends and fellow triathletes Jess, Kenny and Caitlin.  While this campground doesn’t offer a great deal of amenities, I like it.  For one, I don’t need a lot of amenities when I’m camping.  And it’s also right on the Lake Placid Ironman Bike Course, so we can literally just hop on our bikes and ride the course.  So anyway, we ended up setting up camp in some rain but it was tolerable.  Only a few things got wet in the process.  Once everyone made it in, set up camp and was settled, we made dinner and chatted about what the weekend of training would entail.

First up, we were planning to ride two loops of the bike course.  The first loop was to be a full 56 mile loop in order to show everyone all that Lake Placid IM has to offer.  The second loop was your option.  Some of us had planned to ride it without the two different out and back sections cutting it to about 34 miles for an even 90 on the day and other folks were planning to ride the whole thing again for the full 112 miles.  We got a bit of a late start around 9:30 AM.  I know that doesn’t sound all that late, but when you’re planning to ride for 6-7 hours, earlier is better so that you can salvage at least some of your day.  We left right from the camp ground rather than driving up in to Lake Placid and starting the course where it will start on race day.  This was my first time riding the course this season and we started out with the 8 mile climb from Wilmington into Lake Placid.  I have to say that I was impressed and a little bit surprised with the numbers that were showing on my Garmin.  Granted we were doing the climb while our legs were fresh, but I was showing strong numbers and this left me feeling hopeful that maybe all of this training is going to provide some pay back on race day.  Once in town we continued on the course talking through what lie ahead with our other riders.  We had a few close calls in town with drivers.  I mean seriously people, share the damn road.  We have every right to be on the road with our bicycles and if the shoulder is in horribly dangerous conditions we are LEGALLY allowed to ride in the road.  Slowing to go around us it not going to delay your day that much.  Oh and also if there’s a stop sign, you should STOP at it.  End rant.

Elevation profile for one loop of the course… no joke really, especially when you do it twice.

After heading up and out-of-town we began our decent into Keene Valley.  This is a super fast downhill section that can be pretty hairy especially depending upon the condition of the road.  Overall, I would say that the road on the downhill wasn’t too bad.  There were sections where I was definitely out in the traffic lane, but when you’re cruising downhill at 35-40 miles most cars are typically fairly understanding on this section.  My max speed was 38.5 on Saturday.  On a bike.  Yowza.  That decent never fails to disappoint in the white knuckle gripping department as you do everything you can to hold on and keep your bike up right.  Anyway, we all made it down and then started the remainder of the course.  This is about when it started raining.  The first rains we caught were just light rain showers.  No big deal.  Once we hit the turn around on the out and back in Ausable, it started to pour.  And I mean …. pour.  There was literally a river of water running down the road.  I had to ride the yellow line just to not ride through inches of water where I couldn’t see if there were potholes etc underneath.  Add to this the fact that my chain kept dropping on my bike and you can easily see why I was now getting frustrated.  I don’t mind riding in some rain, but this was crazy.  As Laurie, Kenny and I began the climb up route 86 we all agreed that after one loop we were going to call it a day.  With the hard rain, semi-bad road conditions and crazed drivers, it just didn’t seem safe to continue on.  Not to mention, there was no way that I was going to head down that decent (read 38.5 mph) if the road was wet.  No. Way.  So we headed back to camp and chatted with the rest of the group.  Everyone except Ben & Caitlin decided that they were done with the bike and would move on to completing their brick (run) for the day.  Ben & Caitlin headed back out as the rain had stopped and they were feeling optimistic.  I will add here that they got caught in a couple of additional good rain storms.

After changing out of every piece of soaking wet clothing that I was wearing I headed out with the rest of the gang for a 5 mile brick on a very hilly section of route 86.  I am very happy to say that I had a strong run with no stomach issues and a very solid pace considering that I had just biked for three and a half hours.  With a loop of the course and a strong run done, I was feeling good about the training that I have put in thus far.  Once everyone was showered and cleaned up we made a ton of snack and an early dinner before heading into town. 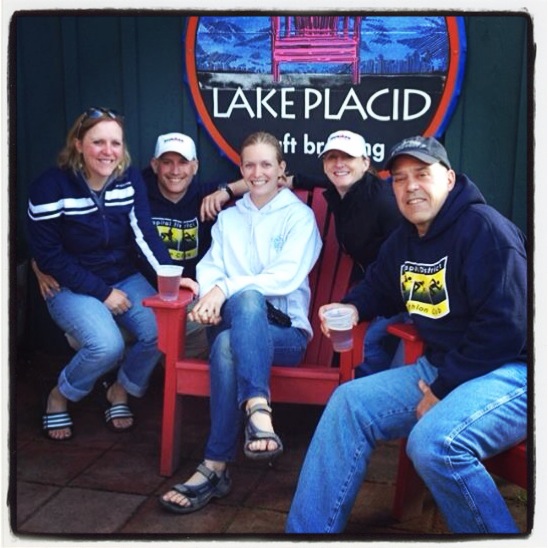 We definitely made a pit stop at the Lake Placid Brew Pub.  Not only is it a favorite, but I’ve been coming here since I was in college at Paul Smith’s.  We enjoyed a beer on the deck until the weather got a bit too chilly and then we move indoors for a game of pool and darts.  Being triathletes on a mission we didn’t stay out too late, but rather packed up and headed back to the camp sites to get a good nights rest before our Sunday AM training was to start.

On Sunday our plan was to run the full 13.1 mile course.  On Ironman day it will be a two loop run.  We headed back in to Lake Placid to start the run around 10:00 am.  We seriously could not have asked for a better day weather wise.  I tried out my new fueling plan and it proved rather solid yet again.  I felt pretty good despite tired legs and a hilly run course.  While hilly, the course is really scenic so if you can focus on that, the run isn’t all that bad.  I greatly enjoyed the beauty of it.  It’s a similar course to the Lake Placid half marathon, which was my first half marathon, so I was happy to be back where I had started.

Getting themselves ready to run.

On the run course…not too shabby

It was a beautiful day and in its honor I put up a great run.  Again, my number showed me that something must be happening and if I can trust in my training that good things should happen for me come race day.  Fingers crossed any way.

After finishing our run, packing our faces (back at the pub of course) and cleaning up, Ben, Laurie and I headed to High Falls Gorge.  We were the three amigos for the rest of the weekend as everyone else had obligations at home to return to.  I have biked by the gorge for the past three years as we’ve ridden this bike course a number of times.  This was the first that I’d stopped to visit it.  This was Laurie’s idea by the way and it was beautiful.  If you have the chance when you’re in or near Lake Placid, you really should stop and see it.  Nature is a beautiful and powerful force.

After this little sight-seeing adventure we headed back to camp to relax and unwind.  There were steaks and smores by the camp fire.  Overall it was a really great training weekend and it was exactly what my confidence needed.  I have 60 more days of training ahead of me.  I am determined to stay focused on the finish line.

How was your training?  Or did you spend the long weekend relaxing?

This entry was posted in Ironman, Ironman Lake Placid, Training. Bookmark the permalink.