I’m a Lake Placid girl by nature.   I went to college at Paul Smith’s College and I spent many weekends as a kid at a family vacation spot in the Adirondacks.  Lake Placid is where I completed my first half marathon and it’s where I first fell in love with Ironman.  So needless to say, I’m always happy to return and spend as much time as possible in this beautiful town.  I love it in all seasons! 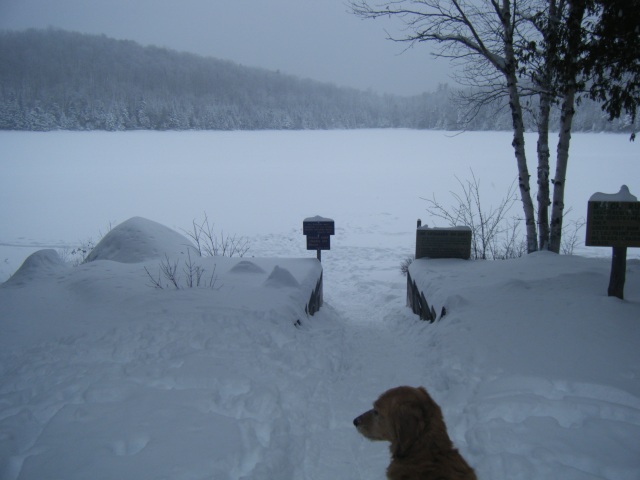 For the past few years I have marked my calendar for the day that you can sign up for a volunteer position for Ironman Lake Placid in July.  The first year I volunteered at the finish line doing chip timing removal.  This was my first experience at an Ironman and it was remarkable.  Last year I had planned to help at a bike aid station, but ended up attending with my kiddo and had something like 15 friends who were competing so volunteering just got too hard and I decided not to do it and just focus on attending the race and spending the day with my little dude. 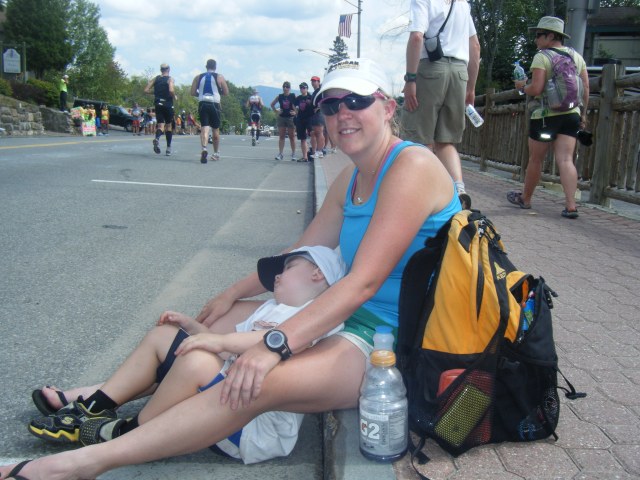 This year, I decided to go along with the group and volunteer at the bike special needs station.  It was a total blast, but I’ll give you more on that later.  Let’s start from the top of the day!

With the new swim smart initiative the race was set to start at an earlier time of 6:20 AM.   So, we arrived in town around 5:30 AM.  We gathered up all of our spectating Ironpeeps and then worked our way through the crowds to find a good place to watch the race go off.

As close as we were going to get 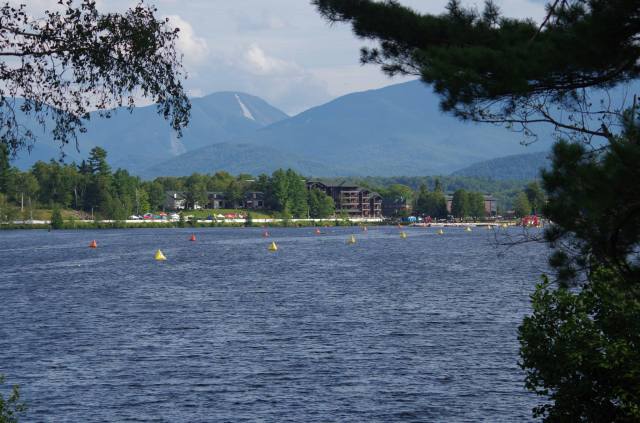 Here’s a view from the other end without all of the racers… Two loops at 1.2 miles

We watched the pro’s go off and then they started the age groupers.  While we missed the crazy mass start of years past this really did look safer from a spectator perspective.  I talked to several people after the race.  Some said it felt safer, others said they still got beat up pretty good-looking for a piece of water to swim in.  So, who knows.  What I can always tell you is impressive is watching pro triathlete Andy Potts complete the swim in less than 50 minutes.  Let’s just say that his two loops of Mirror Lake are about equivalent to one of mine.  He is blazing fast in the water.

Most of the Iron Peeps and I spectating!

After the swim went off we managed to see most of our friends out of the water before we had to head over to bike special needs for our 8-2 volunteer shift.  Upon checking in we were asked to organize, organize, organize the bike bags.  For those who don’t know, the bike special needs bags are bags that are given to racers that they can use to pack whatever they want for the half way point (56 miles) on the bike.  So we had 30 rows of 100 bags that are individually numbered.  The morning shift folks had organized them already, but we needed to double-check that they were in order, that they were not tied shut and that we were ready to go when the racers came around. 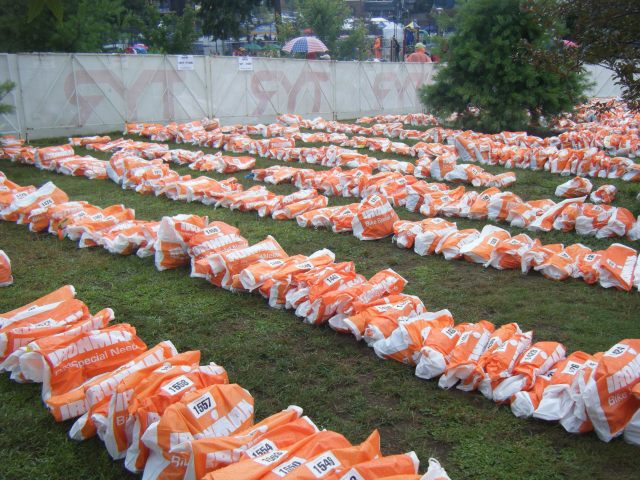 All Lined Up and Ready to Rock

This bag was in my row… Triathlon includes all members of the family! ❤

Once we were all organized we had some waiting to do until they completed the first loop of the bike.  Our first guy through was none other than Andy Potts.  Spoiler Alert…. He led the race the whole day and looked great doing it.  He is an AMAZING athlete.  After a bit the age groupers started coming through.  Some didn’t stop as they mustn’t have needed whatever they had packed in their special needs bags.  Many stopped to refill fuel bottles, grab new food, replace a tube that they had changed on the first leg of the bike.  Some applied sunscreen while others changed their socks.  Everyone’s needs varied.  As I informed one racer, we were hoping to be like a full service gas station…. tell us what you need and we’ll help you get it. 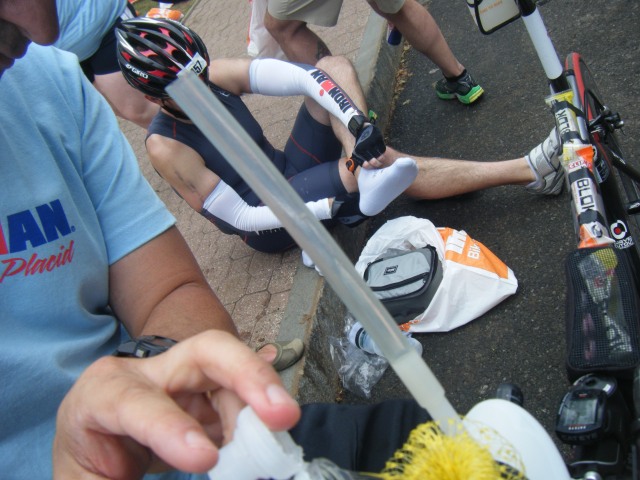 I’m holding the bike while someone else refills his aero bottle and he changes his socks.

Volunteering in special needs was a really rewarding experience.  We laughed and joked with people and we helped them on their way.  The racers are all so incredibly thankful for the volunteers and it’s a really positive experience.  We had a few good chuckles over the guy who had a McDonalds cheeseburger in his special needs bag and the guy who took a half an hour break with us while he ate some pizza and laid on the ground.  There were other good stories, but many too many to share here.  As someone who’s prepping for an Ironman I observed many thing, some of which I may use on my own race day.  We’ll have to see.  Anyway, the long and short is that it was awesome.

After volunteering, we made our way over to the volunteer tent to refill our own tummies before heading back out on to the race course to watch the marathon.  We wisely decided that we would watch from in front of the Lake Placid Pub & Brewery so we were able to spectate and drink a good beer.  This puts us about half way on the run course.  So once again we were able to see some friends come through. Once we had seen all of our racing friends past us, we headed back over to the Olympic Oval to find a place to spectate the finish line.

We spent the remainder of the evening near the oval watching triathletes complete their journey.  And once again it was highly inspirational.  I loved seeing everyone cross that line head and hands held high.  The finish line of an Ironman is a truly spectacular place to be, especially after night fall.  The lights go on and the music gets turned up and you can hear the excitement. 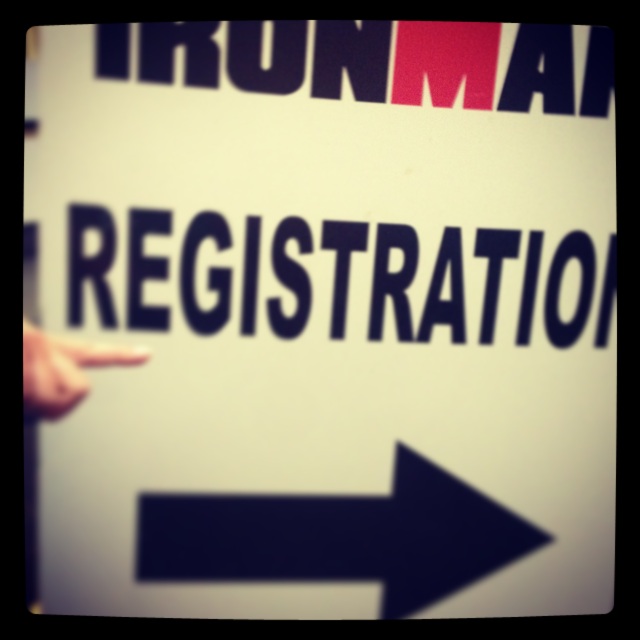 We eventually headed back to the campsite slightly before the race had completely wrapped up.  As it turns out the day had inspired many of us and we needed to grab a quick few hours of sleep.  When you volunteer at IMLP, you get first preference in registration for the coming year.  So at 6:30 AM we headed back in to town to sit in line and wait for our turn to register for next year’s race.  I can say that not everyone was sure whether they would register or not and before the morning was over, we had our answers.  Some were a yes and some were a no, but we’ll all be training together next year.  And well, you already know my answer. 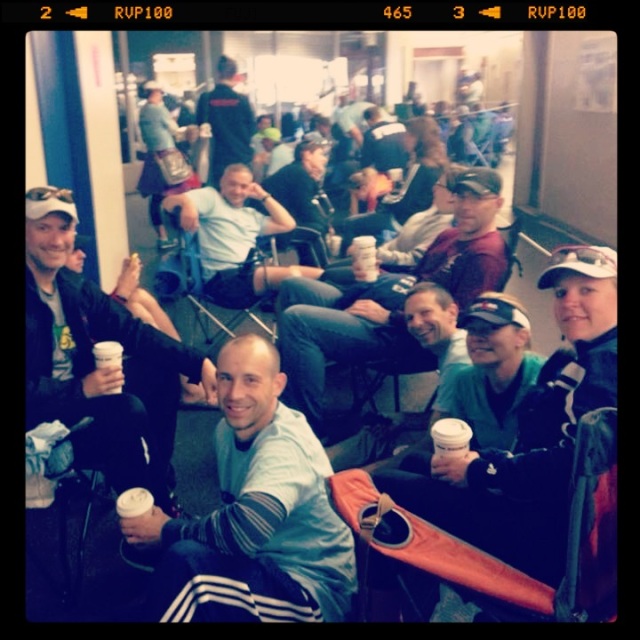 This entry was posted in Inspiration, Ironman, Ironman Lake Placid. Bookmark the permalink.

2 Responses to {IMLP} The Race & Volunteering